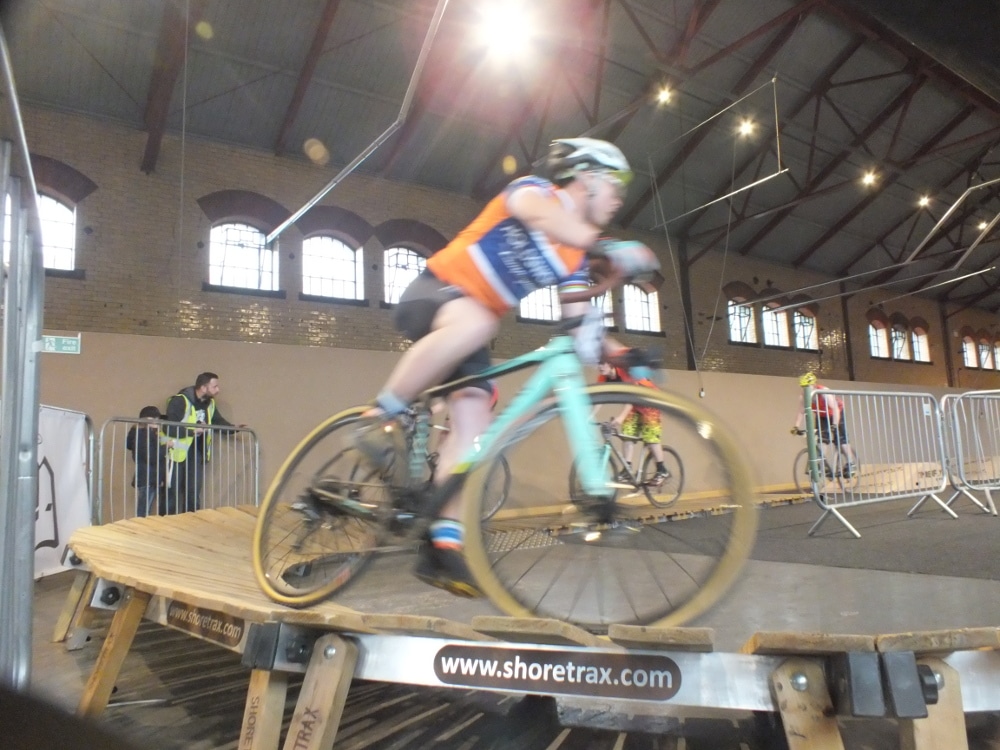 Cyclocross is normally associated with being held in a muddy park in the middle of winter and a way for roadies to keep their fitness up during the off season. Run when the days are short and the rain is horizontal it often results in cold hands, dirty bikes and spectators huddled in any sheltered spots they can find.

Urban cycle across is something a bit different. Kelham Island Museum was recently the location for the first round of the Sheffield urban cx series. Taking place across three locations in central Sheffield, the 6 May saw a small group of riders fill every space of the first event to prove themselves on a circuit around an fantastic old industrial setting.

Gone was the need for pit crews and pressure washers. Instead there were cobbles, North Shore sections through buildings and racing round sculptures and exhibits.

We went to take a look to see what it was all about. First thing that has to be noted was the lack of any sort of consistency not only with the bike used but also the background and style of the riders. There was everything on display drop handlebars on cyclocross with drop bars both old and new carbon and steel, hybrids, gravel bikes, mountain bikes, a lot of 29ers, a lot of single speeds … even 6 inches of full-travel front and rear on an old school 26 “inch wheel mountain bike. Outfits range from full on team lycra to jeans and T-shirts even a man in a skirt and the bra top on his stag weekend … of course what do you do on you stag weekend? A cyclocross race of course!

The races were limited to the number of riders that could take part as this was a tight course wooded boardwalk sections inside old factory buildings, cobbled streets, steps lots of concrete, lots of different surfaces, cobbles, wood, polished painted concrete, slabs, plywood, more cobbles in a lot of variety in different places. If it had been wet might of been a different result for many.

The race was split into four categories – Amateur Men, Sport Men, Women’s and Vet’s. Each category had two qualifying races with the fastest six from each leg going through to the final. The riders started 20m away from their bikes a Le mans style start. They then dashed down the cobbles jumping on their bikes and disappearing off to the first corner. Once round that first corner you sneaked around the outside of the main factory building over a short section of Boardwalk to turn back on yourself and then do a sharp right up a steep ramp sleep that took you up to the first floor of the museum building. Once inside you are met with more boardwalk a a couple of rises, a lovely bermered corner, then negotiate a couple of lifts before then you disappeared out of sight from the spectators down some steps and out the back the old buildings return again down along cobbled street to start lap two.

Spectators were treated to some great vantage points out on the old bridge that links the two main buildings that firm Kelham Island Museum. Inside on the upper floor away from the cold wind that was whistling round the site spectators could watch the race as it sped round some pre-fabricated north shore style trackway.

Beer, coffee, sandwiches all available a few steps away in a couple of rather nice cafe’s – a far cry from the groggy old coffee van in the middle of the woods or muddy field in the middle of nowhere. 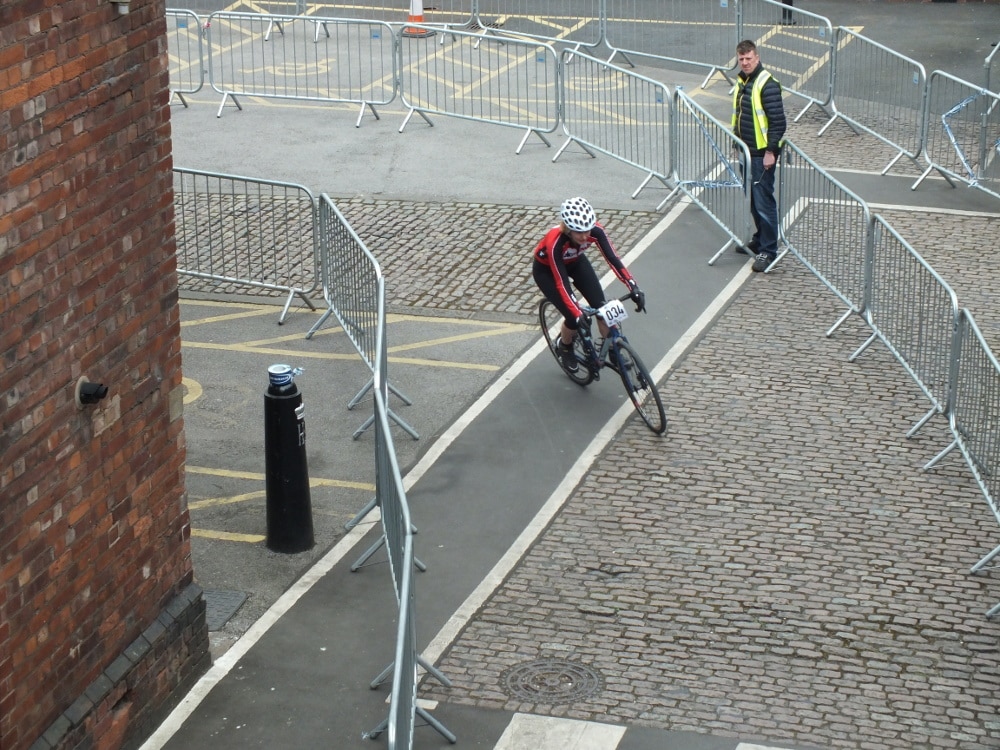 The racing was fast and furious and despite some of the clothing people were clearly trying and taking this seriously. Like most cyclocross races, the course was very spectator friendly and there were good viewing points around 80% of the course. There also wasn’t much time in between each race and they kept feeding out riders group after group to keep people entertained.

I can’t help but think that the people with the biggest chance of winning are those deliveroo riders, you know the guys with the blue boxes on their bikes racing to deliver food around town probably the best equipped for a course like this.

We caught up with Adam for a few words about why the event had come together and where the others were going to take place. He said the next event would be at Park Hill flats in September and he’s got a venue in mind for a third event. 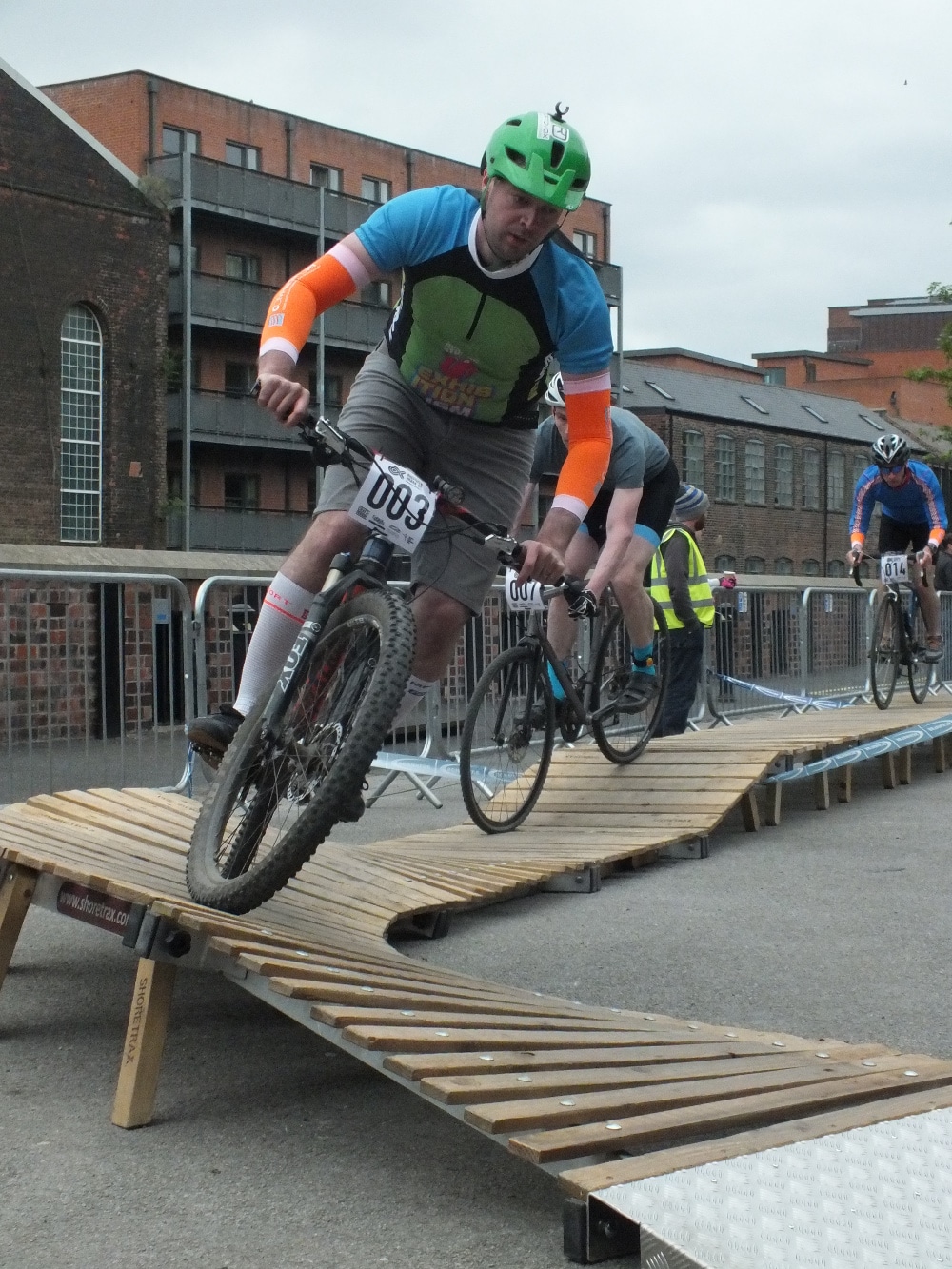 Personally I think the format has a lot going for it, good entertainment good quality riders, food and beer on tap, central city location, after the kelham island event there was a local peddlers market … that’s peddlers p-e-d-d-l-e-r people selling goods not just bike bits! craft beer, street food, local makers and artisans just round the corner so you could make a day of it turn up at lunch, watch the racing and go on into the evening in the market round the corner sounds too good to be true good way to bring people into an old inner city area.

There was a good feel to the event and no bike snobbery and plenty of smiles from both the spectators and competitors. Rider Anna Lowe summed the course up “”It was just so intense, the whole thing felt like a blur of cobbles, steps, ramps & corners. Such good fun, how often do you get to ride inside a museum? I won’t forget that one in a hurry!”

For further information  check out sheffieldurbancx.co.uk

@roadrunnerbags Burrito bag being used on the stok

Feeling so lucky to have this so close to home. #

Top of the world ! Just a case of knowing where to

Getting a cheeky morning ride in. Find going out o

Off out early to beat the heat and my growing abil

Having a bit of a stock take and came across these

One from this afternoon's commute. Not a bad way

A fresh delivery from Voile straps this afternoon.

Busy putting signs out for the #gravelgranfondue .

A fresh delivery of @cranktank4 has just arrived.

Heavy load. Getting a bit of weight training in.

Today I've mainly been working on the risk assessm

A fresh delivery from @ron_kingcage has just arriv

Plenty of riders coming in on the #Hardcore100 #

Putting safety signs out for the #Hardcore100 . W

Busy weekend ahead so getting a cheeky Friday ride

Getting the important stuff sorted for this weeken