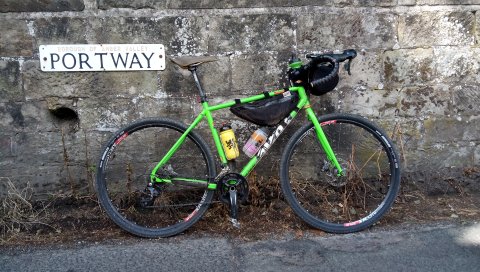 The Peak District has been populated since neolithic times and is covered in ancient tracks. One of the oldest is the Portway which stretches from Mam Tor to the Trent.

The route was in use until Medival times and it’s original line has been lost by both agriculture and development and the building of other roads. Evidence of it’s existence can still be seen with village names such as Alport and barrows and cumuli along some of it’s original route.

We used the Portway as inspiration for the Road to the Peaks route. Starting at the Hemlock stone just outside Nottingham. Our route passes places such as Dale Abbey, the Portway at Holbrook, Alport Heights and finishes at Mam Nick. It mainly consists of quiet lanes, byways and bridleways and is suitable for gravel bikes and MTB.

The nearest railway stations to the start are at Ilkeston, Long Eaton and Nottingham. Edale station is just down the hill from the finish and trains can be got back to the beginning from there via Sheffield.

Whilst doing recon for the Road to the Peak, we rode to the start in Nottingham and from the finish back to Chesterfield. We’ve added a couple of kilometres onto the route we’ve used to make it just over 200 km and a suitable DIY Audax contender – think of it as Gravel Audax or GrAudax ! It’s a proper day out but certainly do-able in Summer months.

Like what we do ? Why not buy us a virtual coffee.
Don’t forget to check out our other site – the Peak District Guide.

Musettes going off to a customer. In our Spring Cl

Cycling caps from only £5.99 in our Spring Cleara

One of my fave bridleways back over the hill to Ch

Off out exploring a few lesser known trails near h