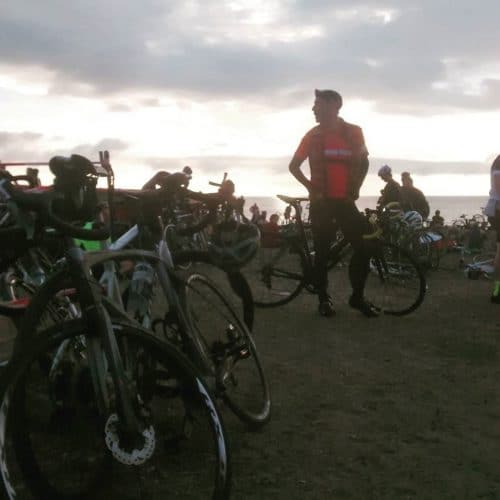 The Dunwich Dynamo has been a ride that’s been on my list for a while. Held on the weekend nearest to the full moon in July, the ride goes from London to the village of Dunwich 180 km away on the Suffolk coast.

This ancient hamlet was once a major international port and had a population greater than London in Medieval times. The ravages of time and coastal erosion have however take their toll and the village has less than a couple of hundred inhabitants now.

The event started in 1993 when a group of London based cycle couriers thought it would be fun to ride to the coast on fixed bikes. Since then the event has grown and there are over a thousand riders taking part. Unlike most sportives here is no entry fee – just turn up and ride.

The riders congregate at London fields. The range of bicycles was amazing – from deep rimmed Colnago’s to ex Postman’s bikes. As I had a couple of trains to take I chose to use a folding bike which I had fitted with a hub dynamo, Brooks Cambium saddle and slicker tyres to make life a little easier. My clothing choice was a Routier merino jersey, a Verge Shorts and Gilet for the early hours to keep my core warm. Naturally this ensemble was finished off with a pair of Handlebar Mustache socks.

At roughly 8 o’clock riders slowly start heading east. The atmosphere was convivial with no pushing and shoving all riding as a huge Critical Mass style ride out through the streets of London.

After around an hour of urban riding we reached Epping Forest and the sprawl of buildings was slowly replaced by trees and fields. There is only one official feed station on the Dun Run at roughly half way in Sudbury which is run to raise money for the firefighter’s charity. However many pubs had bikes outside with riders partaking in ad-hoc re-fuelling.

As we passed through small Essex villages, many of the locals were out in their gardens cheering us on and enjoying the spectacle. Then it went dark and the mass of riders started to spread out a little. The navigation was quite simple – just follow the back light of the bicycle in front.

Occasionally there would be a train of faster club riders stretched out and riding with purpose. If I was on my racing bike I would probably be among them, but riding at a slower pace gave me more chance to enjoy and reflect on the ride.

After a stop for a brew and a burger at Sudbury the effects of night riding started to kick in. All sense of time and distance went out of the window. The kilometres on my GPS seemed to take ages to click down. And then suddenly it was dawn. With just 20 km to go a glorious sunrise could be seen on the horizon which coincided with arriving at one of the impromptu feed stations that had been set up by the kind folk of Suffolk.

Suddenly I was at Dunwich. This sleepy backwater had been taken over for a morning and the peace of riding through the night was broken by cars, coaches and trucks and people getting some normality back in their life. I carefully made my way onto the pebble beach, stood my bike up and rested my head down for an hours well deserved sleep before heading off for an early breakfast at six in the morning.