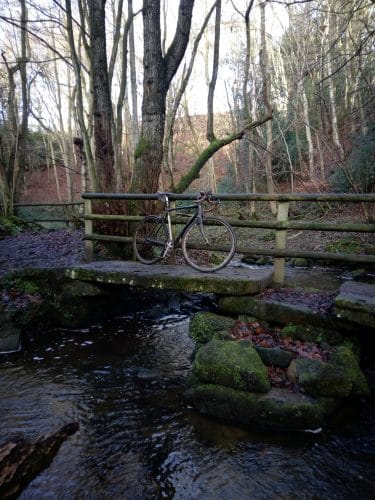 One of my mate’s jokes there are two types of fun. Type 1 is the instant hit that you get while you are doing whatever. The other, Type 2 is what you get when you’ve finished. That delayed buzz and feeling of satisfaction from pushing yourself.

When I came up with the idea of putting on a cycling event I knew I wanted to go for the type 2 option and organise something that would be challenging but achievable. An epic ride that could be done in a day, fit around family commitments and would feel like a big day out.

I was also aware of the number of other sportive type events out there and knew I needed to do something a bit different for a few reasons.

The first one of course was to try and stand out from the crowd. I’ve been riding mountain bikes for around 30 years and cross bikes for the past six or seven. I’ve also been walking in the Peak since I was a kid and know the area well so wanted to capitalise on that ‘local knowledge’. There was an opening for a ultra CX or gravel type event that did not just chug around the area’s disused railway tracks.

A lot of events that happen in the Peak don’t actually contribute much to the local economy. Riders follow the arrows, eat at feed stations and don’t get to experience some of our excellent local pubs and cafe’s. I think a lot of this comes from a compulsion to use the feed stations and stop nowhere else. Plus, having a timed ride and in some events a medal for different speeds of completion there is an encouragement to press on and not engage with the environment you are riding through.

One of my pet hates is event direction arrows. Fair enough they serve a purpose, but they also end up cluttering up our local landscape when they are not removed. In these days of GPS, why not just follow a map on your handlebars.

I also wanted to keep the route secret from entrants until the week before and change the route for each event. This would prevent the route from getting too much hammer and provide an added interest. It would minimise the environmental impact and allow me to make last minute changes if the route became unsuitable.

To keep that low key and special feeling I wanted to limit numbers. This would also minimise the chances of big packs of riders clogging the roads and trails up.

Back in the early days of cycling, clubs used to run reliability trials. The aim of these was to complete a set route within a set time. They were called reliability, because back in the day bikes were not and a lot of the time the challenge was to finish a ride without your bike dropping to bits. Many clubs still run these events, normally in late winter months as a low key warm up to the racing season.

This format exactly fitted what I was looking for in my events. Where riders had to rely not only on their cycling skills and stamina, but self reliance, an ability to read a map (or at least a GPS) and pace themselves, including how long to spend consuming cake so they got back in time.

After hours studying maps and working out whether suitable routes would be too hard or easy I settled on the 100 km mark as a suitable distance. I also decided that if I was going to do an on / off road route it should be around 30% off road. The reason for this is that you go slower off road so it would balance out and feel more like 50/50.

With the help and support of friends and family, I’ve run two events in 2018 – the Hardcore100 and Brutal Tootle which I’ve had really positive feedback from lots of people that have entered which is really encouraging.

The first two, the Gnarmac Attack and Ronde van Vegas will be in the on/off road ultra cx / gravel format that the previous events have been. The Gnarmac Attack will be heading off into the Peak and the Ronde will be doing a lap of our home town Chesterfield. I wanted to showcase some of the trails, byways and quiet lanes that are outside of the national park.

The third event which will be held mid-September, the Peak Grinder will be a road based event. This will take in some of the Peak’s iconic and best known hill climbs, plus a few lesser known local favourites.